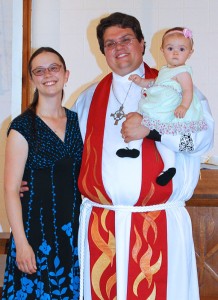 Pastor Jonathan Varns and family at his ordination / installation.

Jonathan Varns was born in 1985 in Sioux Falls, South Dakota.  Raised in a faithful Catholic home, Jonathan’s faith life was strong from his youth.  From the age of five, he played piano, and performed several times per year, even placing second in the state piano competition in high school.

After graduating from O’Gorman High School, a member of the Sioux Falls Catholic School system, Jonathan attended Concordia College in Moorhead, Minnesota to pursue piano and music composition.  While studying there, he met his wife Lindsay who also studied music in vocal and organ education and performance, and they were married in July of 2009, after both of them graduated.  Lindsay is from Perham, Minnesota, and was born and raised in a faithful Lutheran home on the family dairy farm.

After graduation, Lindsay and Jonathan moved to Odessa, Texas, where Lindsay was a choir teacher and Jonathan opened a music studio.   While in Odessa, both of them were active in a local Lutheran Church and, with excellent instruction and support, Jonathan heeded the call to become a pastor.

After two years in Odessa, Lindsay and Jonathan moved to Saint Louis, Missouri, where Jonathan attended classes at Concordia Seminary.

On April 29th, 2015, Jonathan received the call to be the pastor of First Lutheran Church in Ely, Minnesota, and Lutheran Church of the Good Shepherd in Babbitt, Minnesota.  After graduating from the seminary in May of that year, Jonathan was ordained and installed as pastor on June 28th, 2015.

What’s Going on at First