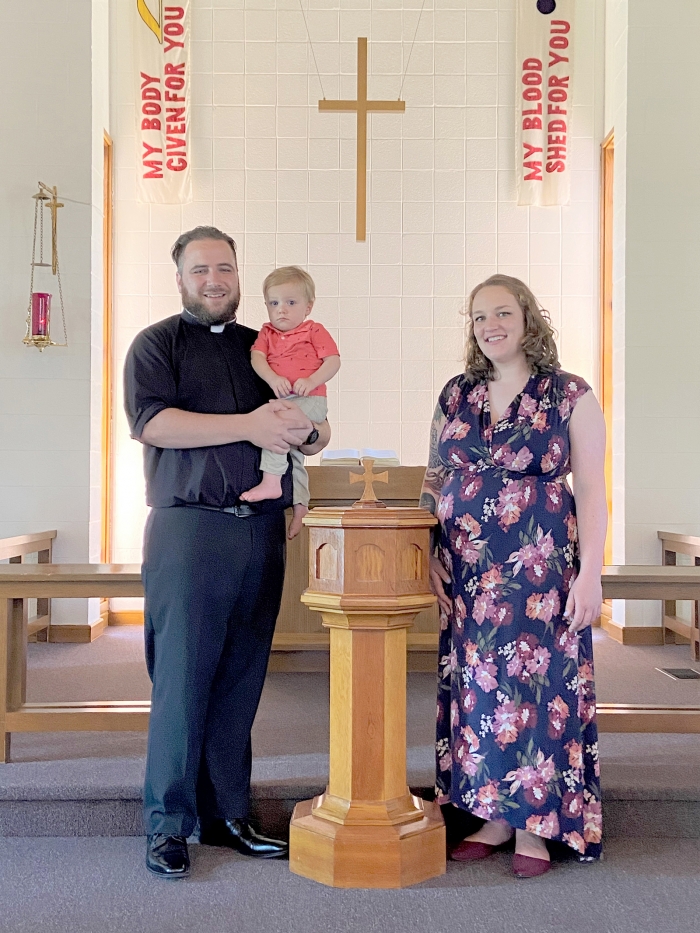 Pastor Burgdorf assigned to Lutheran churches in Ely and Babbitt

Like in so many churches, the members go through long periods in putting out a call for a new pastor. Such has been the case for First Lutheran Church (LCMS) in Ely and its sister-church, The Lutheran Church of the Good Shepherd in Babbitt. The churches have had vacancy pastors filling in for nearly two years.

In May, the two churches received the news that Concordia Theological Seminary filled three of the nine vacancies in their Minnesota North District, and we were blessed to be one of them.

Pastor-elect Zachariah Burgdorf was assigned to both churches. His love of the northwoods, with hunting and camping as his interests, was a good fit to the area.

Burgdorf’s education background included a B.S. degree in physics from Missouri University of Science and Technology before entering the Master of Divinity program at Concordia Theological Seminary in Fort Wayne, Indiana.

It was at Concordia Theological Seminary where Burgdorf met his wife, Claire who was in the deaconess program.

Claire has served in the Minnesota Army National Guard and was involved in St. Paul Church Music Conservatory in Council Bluffs, Iowa helping the church gain access to resources and giving presentations at Lutheran Church—Missouri Synod conferences across the nation.

In 2020 she began working as the Director of Development at David’s Harp. Their mission is to reach into communities and neighborhoods that surround our churches, schools, and mission sites all over the world with the message of Christ through the rich hymns of the Lutheran Church.

Zachariah and Claire were married in 2019. They have a 1-year-old son, John Elijah, and a newborn, Apollos James born July 31 of this year.

In early June, Pastor Burgdorf and his family visited Ely and Babbitt to look for housing. On June 6 he joined Pastor John Grohs in the worship service at First Lutheran Church. It was followed by a luncheon for him and his family to meet church members from both churches. Little son John enjoyed seeing a deer through the window.

In talking with Pastor Burgdorf, he said he loved the area and planned to stay as pastor for a very long time. Most interesting was to realize his wife Claire has a common relative with First Lutheran Church board member Warren Johnson in George and Mavis Nyman. It seems destined that the Burgdorfs would be placed in northern Minnesota.

Pastor Burgdorf was ordained June 13, at Fort Wayne, Indiana Bethany Lutheran Church. He and his family will be coming to Ely and Babbitt in mid-August when it is deemed safe to travel with their newborn. In the meantime, Burgdorf is filling as a vacancy pastor at Hartford City, Prince of Peace Church.

Pastor Burgdorf’s installation will take place at The Lutheran Church of the Good Shepherd in Babbitt at 3 p.m. on Sunday, August 22, 2021. After the installation, members and guests will partake in a meal at the Junction Inn & Suites in Babbitt.

On Sunday, August 29, Pastor Zachariah Erik Burgdorf will officiate at this first worship service in Babbitt and Ely. The public is invited to join in worship at the 8:30 a.m. service at Good Shepherd or the 10:30 a.m. service at First Lutheran Church, where music and song are led by Irene Hartfield.